nce upon a time in a lonely village called Rameshnagar there lived a man who was popularly known as Gopi. His real name was Gopal das and was given the tag of the local goon. He also had a very good reputation with the local police chowki. There seemed to be a strange disconnect between this particular village and the rest in the region. Rameshnagar used to be famous for its handicrafts and anyone who was in this trade was regarded with awe. This was mainly because of the presence of high quality of artisans and widespread market for their products. However due to the rising instances of crime the industry had been affected and now there were only a few of them who indulged in this trade.

The small village was characterized by a line of thatched huts and a few single storied solid buildings interspersed with mudded roads. There was a single mosque and a single temple in the village which were usually deserted. There was a caretaker each for both the houses of religion and Hindus and Muslims used to live in close contact with each other. It was really strange to see these traditional arch rivals living in complete harmony.

Gopi was a born Hindu and used to create trouble for the minority Muslim population in the village. His logic was simple. This village had been first occupied around 75 years back by a Hindu Brahmin family who had established base here to be safe from the local Muslim moneylender Hamza. Hamza used to torture the family purposely and had the support of the local English administration. Over the years the rivalry and the history of the region had been forgotten and Muslims and Hindus had started living with each other in the garb of communal harmony. This was completely unacceptable to a social worker like Gopi who considered himself to be a liberator without whom the foolish villagers would be left at the mercy of the Demon.
He had been involved in multiple murders and rape cases. Not surprisingly all the victims were Muslims. The local police administration never filed a case against him as he had instilled fear even in the minds of the police commissioner. He had a gang of around 25 people who had been handpicked for being the most ruthless souls in the region. They killed with ease and derived a thrill whenever they saw someone pleading for their lives.

A few backs a new officer had been posted as the head of the police department. He was popularly known as Mishraji in the village and had taken over as the head of the district on special recommendation of the state headquarters. He had a hobby of chewing Paan all the while and used to spit all over the walls in the chowki. Due to this habit he had made the otherwise damp walls of the chowki bright red. It of course reeked of a certain strong smell but it did not really bother him.

Gopi was not concerned about Mishraji and his reputation as he had seen a wide variety of commissioners and had been successful in conducting his activities without much trouble. In an attempt to be in the good books of the new commissioner Gopi paid a visit in his office and extended his hands for cooperation. Surprisingly Mishraji was not too keen on the arrangement and had politely told Gopi to leave the station. Gopi was again not concerned as he knew that there was an initial pang of conscience that everyone in that seat displayed. As the days progressed he knew that Mishraji would approach him on his own.

There was a major arms deal that was to take place behind the temple premises. It would greatly strengthen the gang and would help the cause of Gopi. But through an insider Gopi got to know that the police had got some information about the deal and could plan to make a raid. This news was not authentic and as such Gopi had to decide whether to go ahead with the planned deal or not. He could have postponed the deal but it would make him lose some cash which he had given to the dealers in advance.

Mishraji on the other hand had overheard some rumour from a few of the hawaldars who were discussing that there was an arms deal was going to take place somewhere near the temple in which the local goon Gopi was involved. Mishraji mulled over this and gave a lot of thought whether to plan a raid on the gang or not. If the raid proved unsuccessful he had to face the wrath of the headquarters but if he were successful it could help him capture Gopi. This was a very difficult decision and it took him quite some time to make his mind. 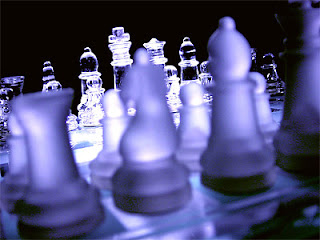 Gopi had to decide whether he should go forward with the deal or not (Deal or no deal) and Mishraji had to decide whether he should raid nor not (Raid or not raid). The payoffs for both the individuals in the different situations were different. Infact the decision of one person was dependent on that of the other. But there was no means by which the other person could have known about the decision which his counterpart would take. The moles had been kept out of the decision loop and as such it was impossible to know what the other was doing.

If Gopi went ahead with the deal and the raid were to happen it could lead to monetary losses of upto Rs.20000. He was confident he would get released soon afterwards but he calculated he would have to shell out that much for the same. If on the other hand he went along with the raid and the raid did not happen then he would stand to again Rs.50000 in the arms deal. If he cancelled the deal and there was no raid then it would lead him to a loss of Rs.10000 as he will have to let go of the advance that he had paid the dealers. But if there was a raid and there was no deal then he would he would again stand to lose the same Rs.10000
On the other hand if Mishraji went ahead with the raid and there was a deal going on he would get a reward of Rs.20000 on account of capturing Gopi. But if there was no deal happening then he would be immediately transferred and it might also lead to a monetary loss of Rs.10000 on account of loss of the monthly pay. If Mishraji did not raid and the deal happened then it would lead to a big loss of Rs.40000 as he might be suspended for non-action and might not be able to find a job soon. But if in any case the deal did not happen and he did not raid it would not matter anything to him. 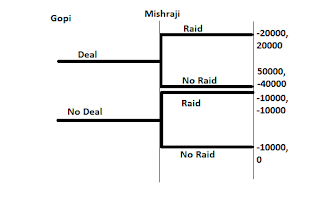 As a result of this analysis no deal took place nor any raid. It followed the same pattern for the next few instances and eventually Gopi and Mishraji entered a truce agreement to not interfere in others business.

The life of the villagers would have become more miserable if an accidental bomb explosion in one of the practice sessions of the gang had not killed Gopi. This was a relief for everyone in the local chowki as Gopi was a dangerous criminal and had committed heinous acts. But Mishraji secretly always regarded him as one of the best counterparts he had ever come across.

This post is an attempt at understanding the concept of Game theory by me which I have taken as an elective. Please dont kill me if i have made any mistake but do point out if you have anything to say.