t was time to kiss darkness goodbye. It was that time of the year when even rocks turned the colour green. Birds made sure that they do not miss out on the fun and chirped as loud as they could. Some of the younger birds used were amused as the older ones were frantically excited and flew around doing various kinds of stunts and somersaults. It was daybreak.

The shore was quiet except the occasional sound of the lashing of the waves. It felt as though waters had their own way of enjoying and created a din intermittently. On the other side of the shore a line of trees could be spotted which ran all the way down till naked eyes could see.

A clear pattern of footsteps could be noticed on the wet sand and it seemed some people had been running around the shore. But all the footmarks were exactly identical in shape and size which was quite odd. If there had been any more marks they were washed away and had been replaced with a wide variety of shells.

As the sun started rising it created a golden glow on the calm water.  A lone figure could be seen running on the shore. The weather was very pleasant and was exactly the kind in which one would like to take a morning stroll. It was very normal to use the beach as a jogging track as there was absence of any running tracks in the village. 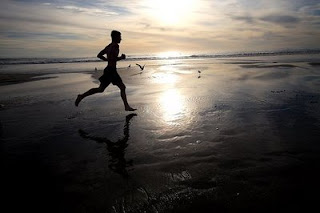 Purab stopped for a second to catch his breath and looked at the menacing advance of the dark red sun. It would soon be very hot and he will start dehydrating. He entered the water and started drinking. He did not care to bring a water bottle nor did he care for any hygiene issues as according to him water in that part of the country was purest. Moreover it gave him great satisfaction in quenching his thirst from the nature’s lap.

After the break of few minutes he again started his jog. He liked to run without any shoes or protection as that gave him the required momentum. Perhaps he never acknowledged it but spending on a pair of shoes did not make much sense to him. He had been running since the last 12 years and perfectly knew how to run without doing any harm to his feet.

It started as a hobby and had developed into a routine. Some of his friends had jokingly told him to measure his speed and he was surprised to observe that he was near the time that the national athletes clocked. Perhaps with age and practice he could become better and could go in the state open run championships. As of now he was happy winning the local tournaments and creating a mark in his village.

He had started off with the impression that his running skills will make him popular in the small village and he would soon be regarded as an icon. He had almost visualized a few of the village women telling their children to be like him when they grow up. On the contrary Purab was ridiculed to be an unemployed and useless lad who wasted his time running around. Some of the smart traders had actually made use of his running prowess and had employed him to be a runner between the two transit points carrying out the messages. But he had soon been fired saying that he used to forget the messages and just concentrated on the running part.

Things had changed a lot since those days and Purab was going to participate in the National sports meet organized by the sports ministry. He had been marked as a rising athlete in his 6th attempt at the state championships. It was a replacement decision as the earmarked candidate had fractured his knee when he had jumped from the 1st floor building ecstatic by his selection. Purab was always considered a promising candidate but was found too dumb to be taken to the national level. Perhaps this was the kind of luck that he was hoping for and he was practicing day in and day out just to make sure that he can make an impact on the national level.

He was a great believer in the power of God and used to pray religiously. He had been very lucky to have reached the national circuit even though he had faced quite a few hardships in his journey. He had lost both his parents in a food poisoning incident in a local marriage. He had been forced to do odd jobs when his uncles had refused to pay for his education. After high school he had decided to support himself. So he started his venture of selling vegetables on the road which he used to source from the farmers in the next village. It was a very low paying and low esteem job but it kept him occupied and also helped him to indulge in his running fantasies. After sufficient practice he had given a shot at the state championships but had been shrugged away without any explanation. This was a routine humiliation for him and it sapped his energies to no explanation. The only motivation came to him when he used to listen to stories about great runners. His story was not half as tough as them but he felt like a superstar whenever he thought of achieving his dreams.
_____________
He could never get selected in the national team and was beaten by the professional runners with a huge margin. It left Purab shattered and he vowed never to think about running. He thought about it a lot and convinced himself that he was not made for running. He could perhaps be a professional vegetable merchant and open up a chain of retail shops. Or else he could go in the trade line and make big money.

A few weeks after the national selections a dark figure could be seen running near the shores. Purab was back on track.