s I stepped down from the train compartment I could smell all types of scents from different corners of the platform. The returning passengers sped through the trodden path to get to the exit gate. There were almost a hundred stripped children running around begging for alms. Some of them climbed the coaches and started sweeping around in the hope of finding any left behind treasure. AC coaches were the most prized ones as normally one could find some money or at least a few left behind boxes of food. As I picked up my bags and arranged them on top of one another, I could see I was being left behind by the others who had already made it out of the exit gates. I quickened my pace and in no time was behind a haggling couple who were arguing whether to catch the bus home or take a taxi. Poor man had to relent to the tantrums of the imposing women in the end and ended up paying a fortune to the robbers who were waiting outside just for this opportunity.

There is a particular charm about this station characterized by rows of bookstands with almost the same kind of collection, rows of food stalls with almost all the items on the menu not available and a mobile army of salespeople pushing their products down your throat. As I made my way out of the main gate, I had already made a mental note to mention this feat in my list of achievements. As I looked around I could see rows of taxis standing in a line followed by a hundred few in the outer circle expecting customers to come out of the ring of fire. No one said anything for a couple of seconds. Around a thousand eyes were scanning me. As I stepped down the stairs around a dozen muscled men came up to me claiming that they were my saviors. The taxis just outside seemed to have a cartel and it was against their code of conduct to take any passenger without triple the fare. Tactics of push marketing were tested to the brink and they would not leave me until I said yes. I heaved a big sigh and started moving my luggage through the man-made maze towards the beaming members of the outer circle. Once there I had to talk for a few minutes before I found myself sailing through the traffic towards the Howrah Bridge.

When I was young I used to be in awe with this structure and the Ganges flowing through the gap. Though the interest still remained, now I only paid the structure a passing glance before folding my hands towards the holy river and wondering what wrong it had done to deserve such a fate. The water had dramatically turned the color of brown and you could see all the brands of beverages floating down along with the garbage pile. A few small boats that were somehow navigating through the muddle were doing their part to make the situation worse. Observing closely I could see a few people washing their clothes off the shore and almost a few feet away a group of young children peeing to glory in the river. The river did not seem to care and flowed down along a lazy pace paying no attention to the atrocities being committed. 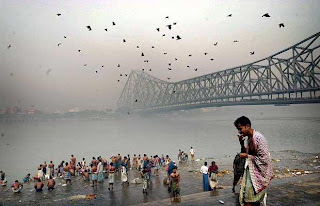 As the jet yellow taxi exited the steel structure, I could see the famed city of Calcutta honking and bellowing in my presence. The place where I had spent more than two decades of my life always had a unique sense of welcoming me. As the main roads started winding into narrow lanes I was overwhelmed by the sudden blast of aroma. Tea stalls, butcher shops and a range of Bengali sweet shops were lined up on both sides of the lane and each offered at least one unique product from the others.

You can take away everything from Calcutta but you cannot take away the appetite of a Calcuttan!

The best thing about Calcutta is the range of delicacies this place has to offer. For example, someone who has had Puchka here can never like a Golgappa or a Pani Puri. Other than this you had all the major food brands thronging every nook and corner of the society. This was pretty obvious considering the kind of excitement food had on the city folks. There is not much to do here except enjoying. The ruling government and the one that ruled for more than four decades made it sure that no one works in the state. Instead a feeling of nausea comes over whenever someone talks about working. But it will be wrong to say that we do not know how to work. Every adda has a few very wise souls who have an opinion on every policy that any government in the world has made. Every business decision is criticized and expert suggestions are given without charging any consultancy fees. In fact one of my friends had once remarked in one such adda session that if top businesses had any sense they would stop hiring the worthless MBAs and see the talent that these lanes had. For once even I agree with this comment, they might not have the finesse of a B-School graduate, nor a structured thought but they sure have a business acumen which will put any bragging Ivy league student to shame. It is ingrained in the culture, the opinions, the debates, the lackadaisical attitude and the constant lookout for pleasure.

It is not just about the food, nor about the adda sessions. It is not about the pleasure seeking attitude nor is it about the culture of the place.

You should have both these sweets in succession to feel what joy it can give you. It has the potential to make you forget all your troubles. One does need alcohol; we have these local remedies that put Bacardis and Budweisers to shame. Also it is not about having a rasgulla or a sandesh from a branded shop. Try having it from a local shop with all the local ingredients. It adds the local touch. Sitting on a ledge on the side of the pavement, surrounded by puchkawalas, chocolate sandesh and a couple of ragullas in my hand can never be replicated by any other place.
_________________________________________ 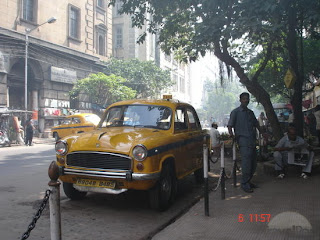 As the taxi turned through the curb I could see my vantage point clearly. A couple of cute looking Bengali girls had occupied the place.

I would return in the evening to my throne.
Posted by JJ at 4:57 PM